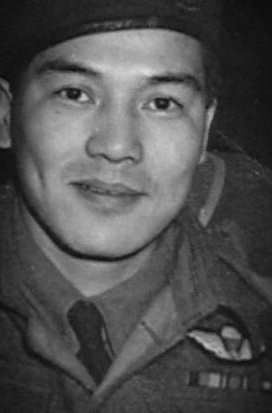 Ernie Louie was part of the all Canadian Tideway Green operation that was dropped in north Johore. The jungle conditions were so harsh (disintegrating boots because of the rain and mud) that instead of a three-day trip through the jungle it took them seven and they had to contend with increasing hostilities between the Malay and Chinese guerillas. By August 24, 1945 Ernie and John Hanna were left to find drop zones for the British and Australians without the aid of the local fighters. They repatriated more than 900 POWs just from one camp in Batu Phat. Ernie remained in Kuala Lumpur until the end of 1945 helping to repatriate POWs, keeping the peace between Chinese and Malay guerillas and supervising the surrender of the Japanese troops.