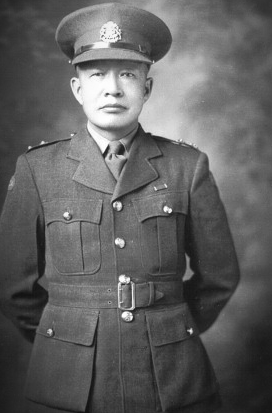 Frank Ho Lem was born in Canton, China in 1900, but came to Canada in 1905 with his mother. His father was the first person of Chinese heritage to have set up a business in Calgary. Frank joined the Canadian Reserve Army as a cadet then the 13th Canadian Machine Gun Corps. In the 1920’s and 1930’s Frank’s skills as a sharp shooter won him many awards culminating with his fourth place standing among hundreds of competitors in the British Empire shoot off near Bisley, England. In 1939, Frank was one of the first to join the army and became a small arms instructor at the Currie Barracks in Calgary. He also trained at the S-20 Japanese School in Vancouver and conducted some Intelligence training crossing paths with future Operation Oblivion operative Doug Jung. Post war Frank immediately set out to lobby the Federal Government and reverse the Immigration Act to obtain citizenship rights for Chinese Canadians. He became a full citizen in 1947 and helped found Pacific Unit 280 gathering Chinese Canadian War Vets after the Canadian Legion refused their entry.